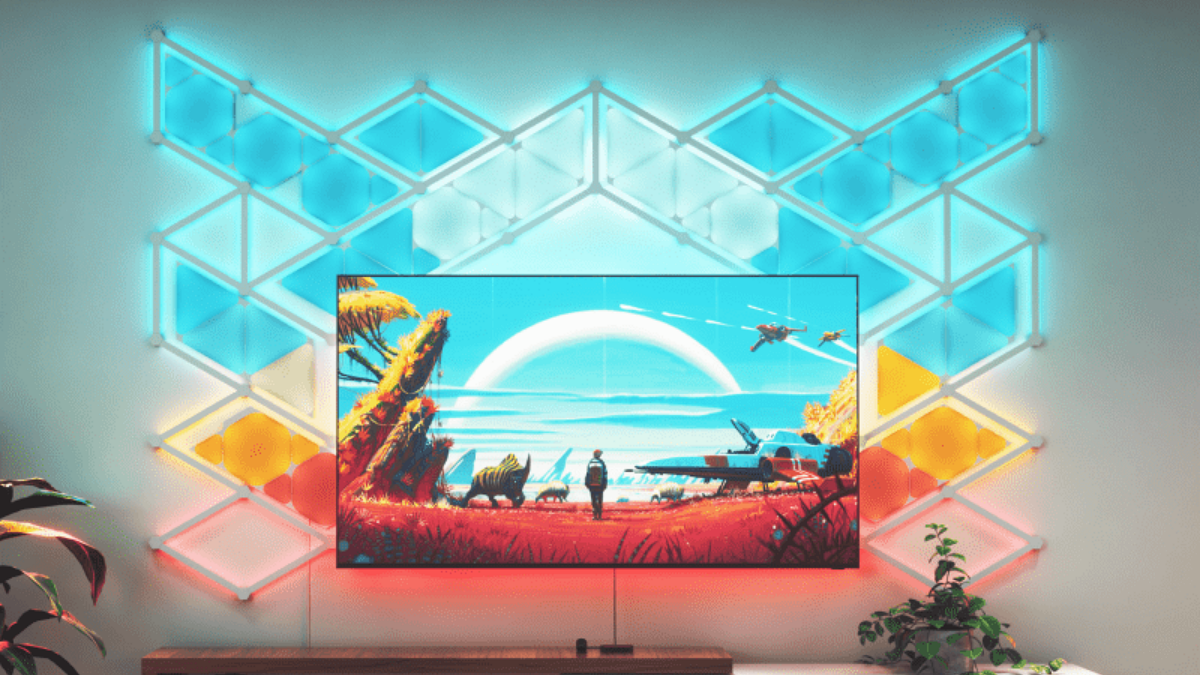 Nanoleaf is finally ready to take over the ceiling and the rest of your home thanks to its new products unveiled at CES 2023, thanks to the Learning Bridge, which basically acts as a hub that connects all of its products together. The Toronto-headquartered lighting company also announced that most of its lighting panels (Shapes, Elements, Canvas and Lines) will also be Matter upgradeable later this year.

New for CES 2023 is the new Nanoleaf 4D TV Smarter Kit, a system that reflects the colors from your TV’s screen onto a Nanoleaf lighting panel. According to the company, this is done through the use of a single 4D camera that can be mounted on the top edge of a TV (if it’s wall mounted) or sit on a wall unit or desk just below the TV.

The kit is powered by a small hub that connects to the light strips and controls the lighting panels by matching the images on the screen or with the audio or music playing in the room, in addition to having the usual color themes and -palettes available on Nanoleaf products. These light bars are also included in the Smarter Kit and will only be available for two length options supporting TV sizes between 55″-65″ and 65″-85″. Like all new products announced at CES 2023, this lighting kit is Matter compatible and will also sync with other Nanoleaf lighting panels in a room via Sync Plus.

Nanoleaf Skylight and Sense Plus switches

The Nanoleaf Skylight is a new ceiling light that essentially acts as a skylight, delivering up to 3,000 lumens of light into any space. It’s made up of square LED panels that appear a bit thicker compared to the company’s other light panels, and can be synced to sound if needed. The skylight is also equipped with motion and light sensors that allow the system to be intelligently turned off in the absence of people.

Sense Plus switches are also a new and important addition to Nanoleaf’s home range. Just like the Skylight, these hardwired switches are Matter-enabled and have built-in motion and ambient light sensors. The Sense Plus Smart Light Switch is a physical hardwired switch that learns usage patterns in addition to turning the light off manually. The Wireless offers the same functionality but wirelessly and can be used like a remote control as it can be detached from the bracket on the wall.

The Nala Learning Bridge also has built-in motion and ambient light sensors, but it’s basically the brains behind the entire system, although the hub itself also doubles as a color-changing night light. Not only does the hub support Matter, but it also acts as a thread border router, allowing you to basically connect the lighting network to the internet and your phone. It’s probably one of the most important elements when choosing a home light from Nanoleaf, as the hub is where all the learning happens and the smart switches can intelligently turn the lights on, off, or dim the lights at a specific time of day, without the need to physically switch them on check.

Nanoleaf hasn’t officially revealed the pricing of its newly announced products, but we can expect them to make it to select markets. According to the company, the Nanoleaf 4D TV Smarter Kit will be released in Q2 2023, while the Sense Plus Controls and Skylight will be released in Q3 2023. Essentials Matter certified light bulbs (A19, BR30, GU10 and a recessed downlight) and light strips that can be fitted to regular lighting fixtures will be launched in the first quarter of 2023.

Affiliate links may be automatically generated – see our Ethics Statement for details.

Check out the latest from the Consumer Electronics Show on Gadgets 360 in our CES 2023 hub.

Spider-Man: Across the Spider-Verse Trailer Release Date Set for December 13, Gets a New Image

S Jaishankar on ‘undiplomatic’ words against Pakistan: ‘I could use much harsher words’ |...